Hi Hi~!
So today like a promised, I'm gonna review a 2007 Popteen and talk a little about 2007 trends^^
Basically this magazine is the end of 2007 so those trends are also relevant for at least the first half of 2008! 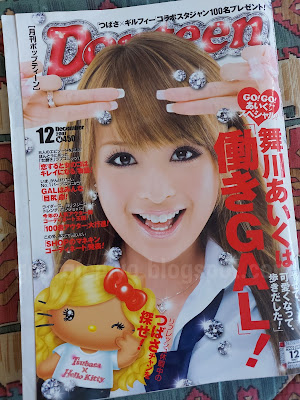 On the cover- Aiku Maikawa
So starting with some commercial and ads~ Here you can see the most popular Popgirls hair color, or at least the one they try to promote- Mauve brown
The thing I liked was the Beauteen packages with the Yazawa Ai style of characters:D (idk if it's originally hers) 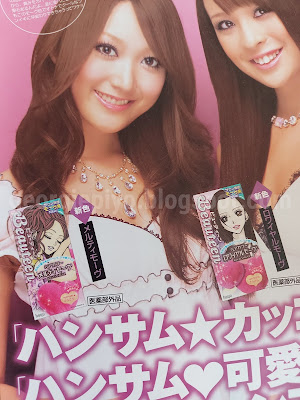 Anyway, Important to say that Popteen at that time was considered for gals and for fashionable girls so not all the models are gals, But you do see a lot of them sporting dark hair, Which I like!
Tsu chan ad! Her hair and outfit are as always perfect! 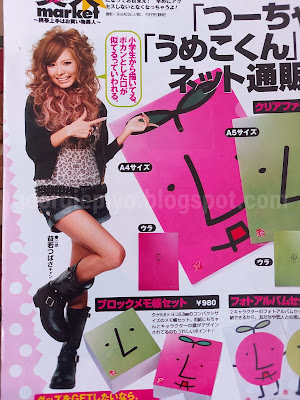 And some more Tsu chan, Wearing  all Gilfy~ This was a dream co*de of mine since I started being a gal! 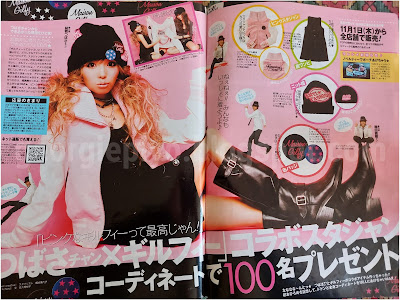 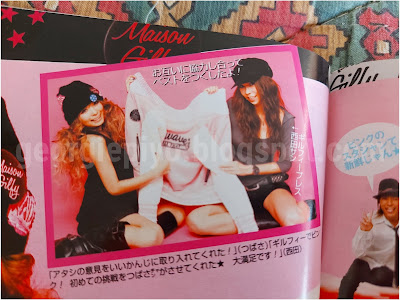 A really cool article they did on this issue is how to wear Tsuba-kaji!
There are a few "substyles" or "characters" to Tsubakaji and here she gives points for each one!
The styles are: 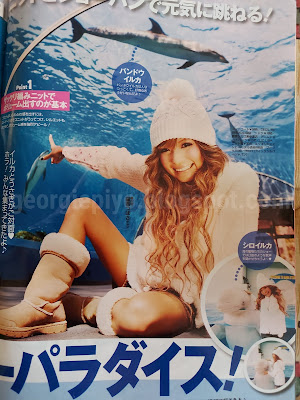 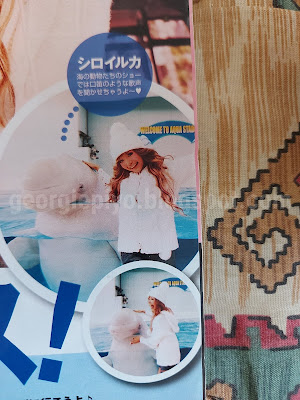 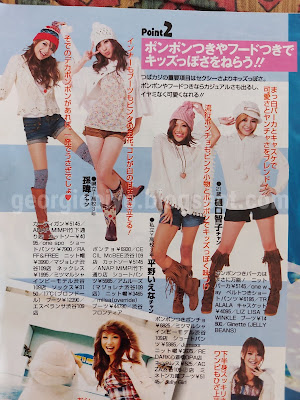 My favorite one from the popgirls' outfits~ 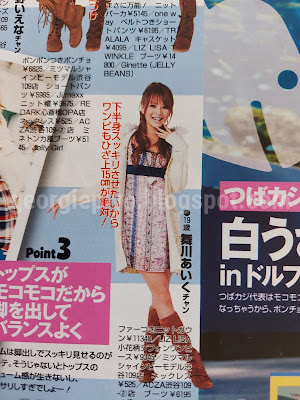 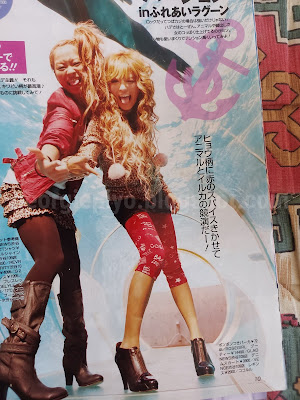 A combo or rock items with hade items, Mostly in warm colors like red or hot pink
The rock items can be black or white, And they can be the hade item itself
Her points were colorful tights, leoprint x vivid color, colorful motif accessories (starts, studs, guitars, skulls, etc)
This was my fave look! 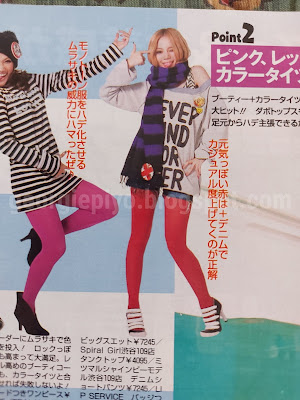 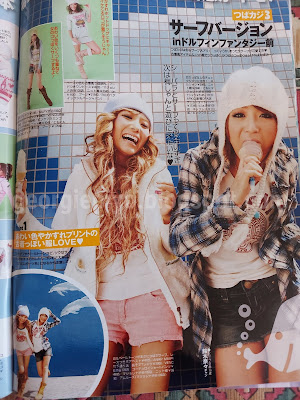 Like I mentioned in the last inspo post I did, at that time the surf style that was very popular in gal since the very start of it, Became more amekaji in a way of combining American pop elements rather then beach elements.
You can now see more American type slogan tees and graphics of American food and 50's retro (cars, Pepsi, coca cola and so on)
Her points were to try and stay in the light and faded color scheme (which is different from the more omocha amekaji of later years with very vivid colors). You see a lot of blue denim and browns, Some natural fabrics like corduroy and suede. Some plaid and Nordic patters that makes it wintery and cozy even though it's basically a beach style.
Down jackets and pompon hats are a MUST 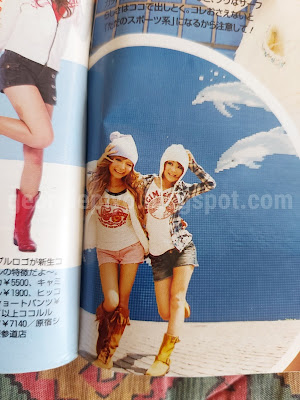 She also says that in that style she wears a lot of Cocolulu and Roxy~
You mostly see UGG type boots and other soft looking shoes
Those ones are adorable! 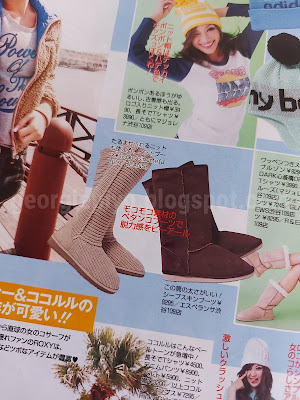 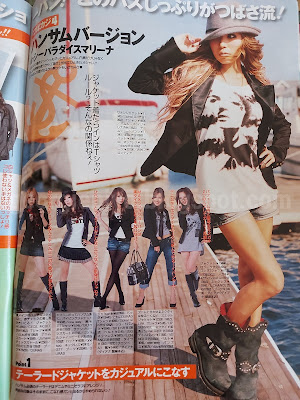 This style is more "Manish" (not the same as boyish!) and it's more grown up and sometimes elegant\sexy
The points are keeping it casual and monotone with a small blast of color. Tailored jackets are a very good way to add a handsome vibe to your casual outfit, The combo of the jacket with denim is exactly the vision. You don't want to be too tailored or too casual, The balance is important.
There are a lot of tshirts in this style, But an important point is, If you wear something tight, balance it with a loose item; For example- tight tshirt x loose pants \ loose tshirt x tight shorts
the accessories that are used a lot are manish hats (fedora, hanchingu), and some ties and glasses.
One last point- The color gray is very strong on this style!
I liked quite a few outfits from this version! 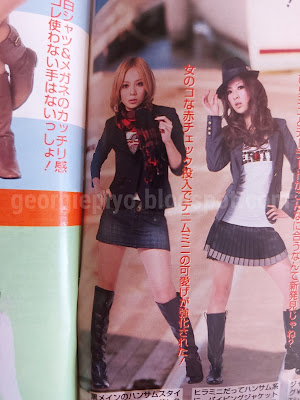 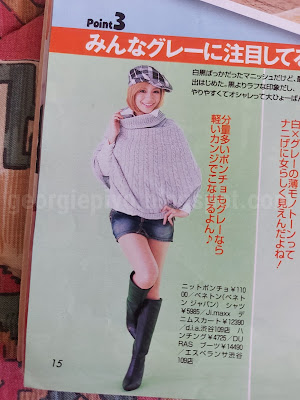 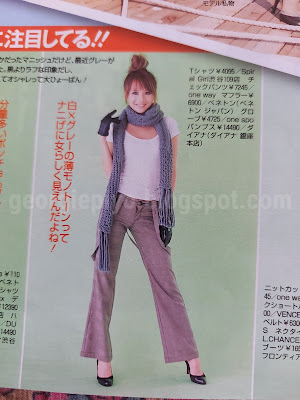 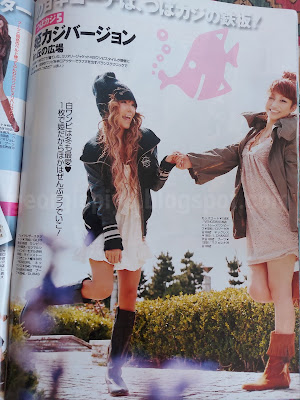 My most recent boom!
I was talking a little about it on my Lizkaji post a last week, And now that I actually read the whole article I can give you some more points about this style by the one and only- Tsu chan<3
So a little off topic- in Himekaji you can see a lot of different "versions" just like the different vibes of the Tsubakajis; Some are more childish, more otonappoi, or more boyish. I don't know much about the evolution of himekaji, But this article is specifically on her himekaji style that is such a great style! But, This is only onw type of himekaji, Obviously this too have evolved a lot and looks a little different from magazine to magazine and from reader to reader^^ (if you want to know more about himekaji as a general substyle, check out Lizzie's blog!)
So basically it seems like in the November issue (that I have to get) Tsu chan was wearing a combo of a white princessy dress with military coat, And it was a huge hit and started a boom among the readers. It was very balanced and gave that cool vibe Tsu chan has!
This balance technique is pretty much use a princessy dress as a main element, And then every other element of the look will have to be rough and casual.
For example in the first photo where Tsu chan wore a white lace dress with a fake leather jacket, Engineer boots and a black wool hat. What a look!!
I absolutely LOVE the rock elements here too- Skull, Studs and man jewelry
No one does it like Tsu chan!
The most popular mix is military coat and a white dress, Which were both a MUST items of winter 07\08
But you also see leather jackets and some down coats. You want the sweetness of the dress to clash with the roughness of the outer, And if you're really into it, with the accessories and shoes too.
this is currently my FAVORITE styling way!
I just love how they said:
A princess dress x A prince outer! 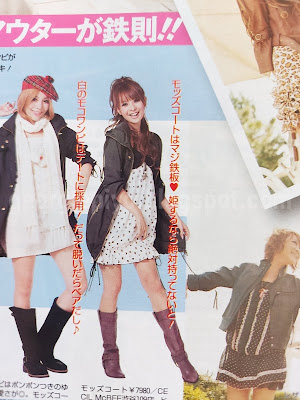 A comic relief brought you by Jun chan 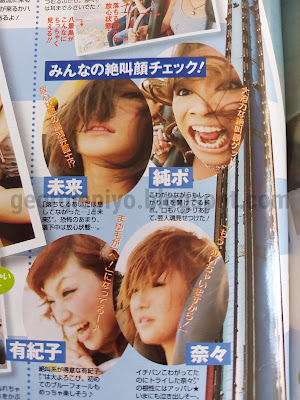 *going to make myself another cuppacoffee*
~
So a few more commercials and we're back! 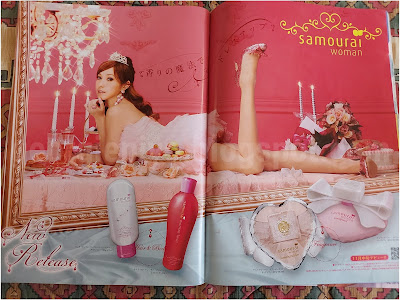 Not the boots again 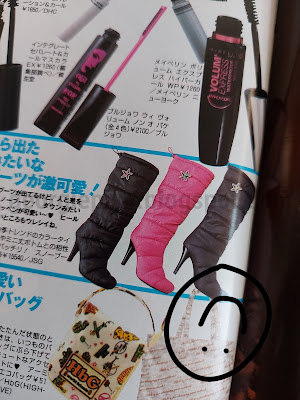 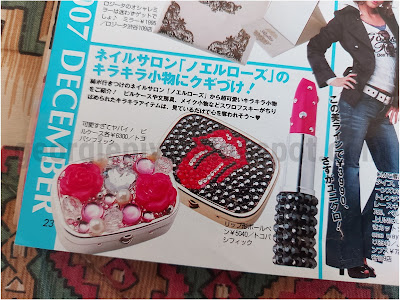 I had to cut the post here cause I don't want it to be too long!
Next there is a super interesting article about this year's trends on each brand! But I'll post it separately^^
A small disclaimer

:
I do this research for myself, Cause I'm really into 2007 gyaru right now, and specifically Tsu chan's style^_^ I'm trying to translate and write my thoughts and ideas about that so I can understand it better and learn more about the trends and the over all vibe! I'm not trying to teach anything and of course you don't have to do 1. 2. 3. to do this style! But I do hope someone else finds it interesting and I really enjoy writing those posts so hopefully you guys can enjoy them too^^

With that I'm gonna finally get up cause I've been writing this posts (the full thing) for a couple of hours now! or is it..
4 hours???
omg
Please let me know what you think of this post!

Oh and I almost forgot! I was requested to make a small dictionary for the words and terms I use that are in Japanese so here are the ones relevant for this post^^:
Kaji - Casual
Mokomoko - Fluffy
Hade - Colorful
Omocha - Toy
Hanchingu - "Hunting cap". The flat men style cap
Otonappoi - Adult like
Ninki - Popular
投稿者 GeorgiePiyo 時刻: 21:38